We’ve made it simple by narrowing it down to only the top 5 Bluetooth thermometers for grilling and cooking; and then providing you with the details you need to discover the best one for you. Here are the five top devices as well as a few important things to look for.

What Smart Features Does It Have?

At minimum, you (obviously) want to be able to monitor real-time temperatures, but you also want to be able to set alerts, timers, minimum and maximum temperature warnings, and be notified when your food is done. This way, you can step away from the oven or grill freely and not have to worry about overcooking and drying out that chicken or steak. Some Blueooth thermometers even let you create graphs of your cooking temperature over time, and create logs of all the different foods you’ve cooked for future reference.

What Is the Range?

Bluetooth thermometers will likely have at least 150 feet of range – before walls and structures get in the way, which means it could effectively be much less. Some devices have better signals than others, and a few might even get up to 300’ feet.

How Many Probe Channels Does it Come With?

Most thermometers will have 4 probe channels and probes, but some may have 6 or more, while others might have only one two. You really want a minimum of at least 2, so you can use both an ambient probe and one for your food. But if you get one with 4 or more, even better.

What Accuracy Are The Probes Rated To?

The best Bluetooth thermometers have probes rated to an accuracy of +/-1F. That’s essentially spot-on and as good as it gets for more reasonably priced models. Higher-end devices, like the ThermaQ Blue, can get to within .7F – which is as good as it gets. Also be sure that the probe and device have a reputation for maintaining a consistent temperature; many cheaper models can behave erratically, reporting accurate temperatures one second and temperatures 20 or 30 degrees off the next 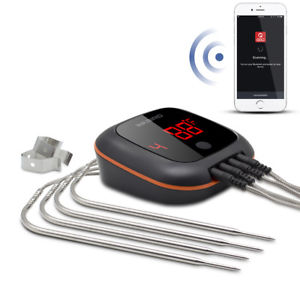 The Inkbird is our top pick for a Bluetooth thermometer; affordable, compact and easy-to-use, as well as accurate, solidly-built and with enough probes for most jobs. Let’s take a look at what makes this thermometer stand out from the rest.

Final Take: The Inkbird IBT-4XS is an excellent thermometer for the price; a reliable, durable device that, has all the smart features you could want in an easy-to-use app, and comes with very accurate and consistent probes capable of reading a wide variety of temperatures. The best part is, of course, that it’s still quite affordable. 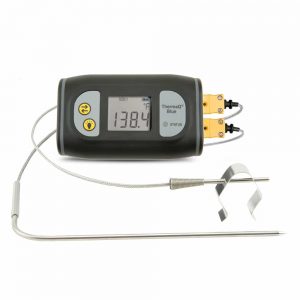 The ThermaQ Blue is a pricey one, for sure, but it’s seriously one of the best – a trusty Bluetooth thermometer from ThermoWorks – known for making some of the best thermometers of all kinds. It’s a lot like the ThermaQWiFi thermometer, but with Bluetooth – in addition to all ofThermaQ’s awesome features.

Final Take: Got the money to spend?This is a beast of a Bluetooth thermometer, perfect for pros, serious aficionados, and everyday cooks alike.Strong and durable, splash-resistant extremely accurate, and capable of doing anything you ask of it. If only it could take more than 2 probes. 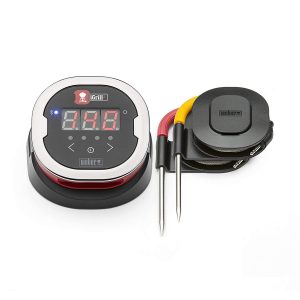 Final Take: The IGrill2 isn’t bad if you’re on a budget. It’s compact, easy to use, does everything you need it to, works with 4 probes, and looks cool, too. But the build quality is subpar and the Bluetooth signal is poor, making it no more than a budget option. 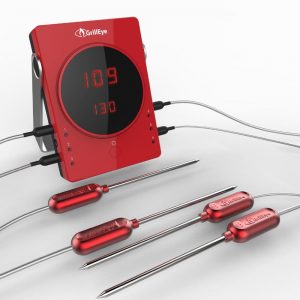 The GrillEye BBQ Meat Thermometer is still quite affordable, but somehow manages to pack an impressive 300’ of Bluetooth range. That’s pretty good – and makes it the most-powerful Bluetooth thermometer you’ll find.

Final Take: For the price, you could do a lot worse than with the GrillEye. The extra-strong Bluetooth signal with 300’ of range is unbeatable, and it can monitor up to 6 probes at once, making it pretty versatile, too. The downsides are that the temperature readings can be quite inaccurate and inconsistent, and the construction is not waterproof. 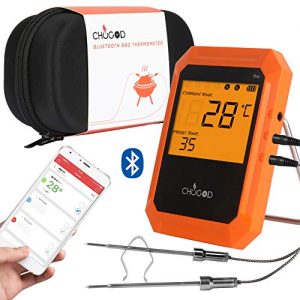 It’s always nice to have a good budget option, and the Uvistare delivers on that front. At the same time, it also delivers in terms of features, with a solid 6 probe channels – a lot more than anybody else.

Our Take: If you just need a Bluetooth meat thermometer but don’t have a big budget, the Uvistare BBQ Meat Thermometer will do just fine. It has 6 probe ports and all the smart capability you need. It just doesn’t have the accuracy, reliability and quality you might want; the signal drops a lot and the temperature probes swing wildly.