When it comes to cookware, few pieces perform as well as a cast iron skillet, with Lodge leading the way as the most popular brand.

Cast-iron has been used for thousands of years and is just as popular today as it ever has been. They are the best choice for searing, browning, slow cooking, stovetop frying, oven baking, and searing in high temperature. They are oven safe and can also be put on stovetop. Even with a constant influx of new materials, technologies and designs, Cast-iron continues to stand out as one of the best, thanks to its fantastic cooking abilities, natural non-stick properties and affordability.

Today, we’re rounding up the best cast-iron skillets available, testing them, reviewing them and stacking them up against each other. Here’s a quick look at the skillets that are currently ranked in our top 10 list:

Why Cooking is Better with Cast-Iron

The benefits of cooking with cast-iron are numerous.

There are two types of cast iron pans: non enameled and enameled. Some cast-iron pans come with an enamel coating, which adds a further non-stick surface and durability for the long haul. Enameled cast-iron comes at a (sometimes significant) an added cost; so why would you want to spend the extra money, since plain cast-iron already works so well?

Enamel takes care of cast-iron’s few blind spots. If you don’t ever want to deal with the trouble of seasoning the pan and would rather just wash it and be done, an enamel coating lets you to do that; it does the non-stick part of the job effectively, while also protecting the iron from rusting if not dried off.

Second, enamel allows you to cook acidic foods, like tomato sauces, lemons or wine. Raw cast-iron can react with these foods, ruining the seasoning and leaching tiny bits of iron into your food. This isn’t dangerous and the added iron is miniscule, but it can affect flavor and texture, adding a metallic taste. This isn’t a problem with enamel-coated cooking surfaces.

Enamel is also a better choice of non-stick surface than traditional coatings, which tend to contain dangerous and undesirable cancer causing chemicals like PFOA’s and PTFE’s. Enamel is stronger and more durable and doesn’t flake off or scratch as readily as traditional non-stick cooking surfaces. Still, it’s a good idea to not use metal utensils to avoid scratching the surface.

So to sum up, get an enameled cast-iron pan if you don’t want to deal with seasoning it, want to cook acidic foods and sauces, and have the extra money to spend. If you just want the trusty cooking performance of cast-iron, don’t mind the extra effort of seasoning (or enjoy it), and don’t want to spend big bucks, then a plain cast-iron pan will work. FYI, I’ve also see people apply enamel to their cast-iron pans as a DIY project.

Lodge Seasoned 12-inch cast iron skillet is both versatile and stunning to your pantry. No matter you are a beginner or a professional cook, this skillet is everlasting. You can also pass it on to the next generation if you care for it well. Make every meal delicious with this skillet.

Cast-iron pans may come in fancier forms than Lodge’s classic skillet, but it doesn’t really get any better – at least not for the price. For the complete cast-iron cooking experience in its simplest form, this is our Top Pick.

It is also very easy to care for this cast iron skillet as it is pre-seasoned. It is recommended to hand wash it. Just place it on burner and remove a thin layer of fat to retain its seasoning for years. 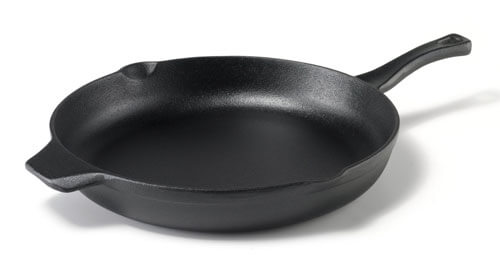 Our runner-up choice, Calphalon’s cast-iron skillet is another great choice that won’t break the bank. It has a slightly unique curved design and handle, and though the cooking surface isn’t as smooth, it’s a worthy contender.

This pre-seasoned 12-inch cast iron skillet is made of pre-seasoned, durable cast iron to slide food smoothly and its long handle makes it easy to lift. It is safe to use in broiler and oven and comes with full lifetime warranty. 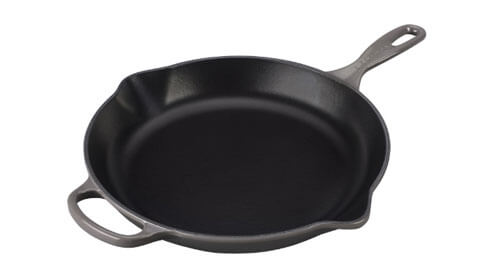 From French cookware maker Le Creuset, this is our favorite enameled cast iron. It’s pricey, but the fantastic design, high-end construction and beautiful, buttery-smooth enamel coating make it an absolute pleasure to cook with. It comes with a helping handle which adds more control and easier lifting when it comes to move between oven, stovetop, and table. If you’d like the convenience and durability that enameled cast-iron offers, you won’t go wrong with Le Creuset. If you’re really in love with this pan but want to save a few bucks you can go down about an inch in size and save around $30 by going with 10 1/4″ version. 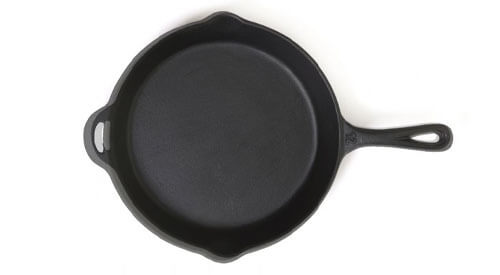 Camp Chef’s cast-iron offering is another solid choice, and is a bit cheaper than some of the others out there. It features a comfort grip on the handles for easier handling and includes dual pour spouts. It’s sturdy and well-built but is rougher and lacking in good non-stick properties compared to some of its competitors. 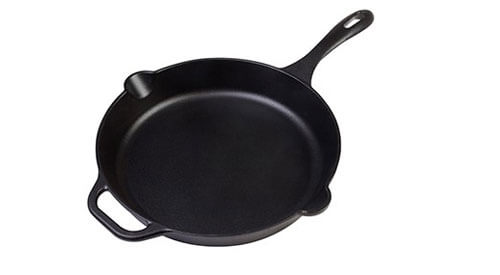 Large, light and elegantly designed, this this cast iron skillet cooks superbly, is effortlessly non-stick and is ready for years of use. Victoria is an established manufacture of cookware products. 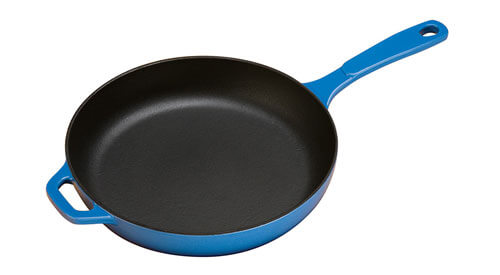 This enameled cast-iron pan is Lodge’s affordable alternative to Le Creuset’s Signature pan. It’s not quite as durable and high-end as Le Creuset but makes an excellent enameled option for the price. Do not buy if you plan on using your pan on the grill or open fire. Comes in either blue or red. 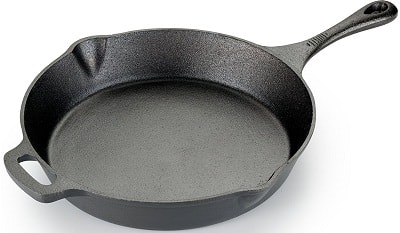 This pan from T-fal is another simple and durable option, and it offers a large, roomy cooking surface with tall sidewalls. This is an ideal pan for cooking over a campfire, as well as conventional style cooking.  However, it’s non-stick performance and weight leave something to be desired. 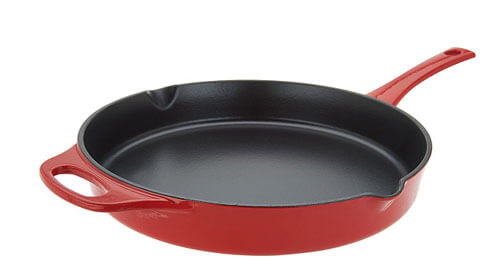 This pan is strong and durable, but also relatively thin and lightweight while still offering plenty of cooking room. A bright-colored and sturdy porcelain enamel coating adds protection as well as a smooth, non-stick cooking surface. Comes in either orange or turquoise. 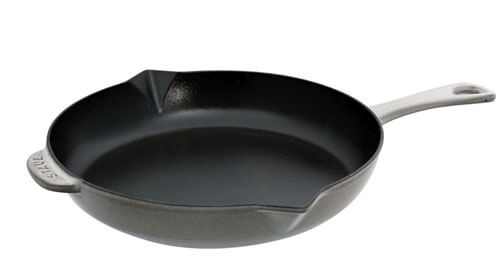 Staub’s enameled cast iron pan is expensive, right up there with the Le Creuset Signature Pan. It’s not quite as durable but has its own advantages that make it a worthy contender if you don’t mind the price tag. 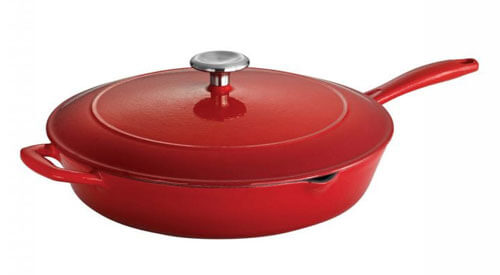 Another great enameled pan, Tramontina’s is significantly cheaper than Staub’s or Le Creuset’s offerings. It’s thick and tall, making it heavy and difficult to use, but does cook and brown foods very well.

How to Properly Season A Cast Iron Skillet

Some people think properly seasoning and caring for a cast iron skillet is time-consuming, but it’s really not.

When you remove the skillet, it should be shiny, ultra-smooth and non-stick. You may want to season more often in the beginning, so that the pan builds up a good, thick seasoning and patina.

Proper seasoning should last plenty of use if properly taken care of; you’ll know when it’s time to re-season when food start to stick to the pan or it starts to lose its shine.

How to Clean Cast Iron Skillets – the Right Way

A seasoned cast iron pan is a real pleasure to cook with, but a poorly-done one can be terrible. And improperly cleaning cast iron is a sure way to ruin that seasoning.

Cleaning cast iron isn’t the same as cleaning other materials; you don’t want to scrub vigorously or use soap, for fear of stripping the seasoning. Instead, you just want to lightly wipe away any food with a paper towel and if scrubbing is needed, use a mixture of kosher salt and water, not dish soap or steel wool. Another way to remove stuck-on food is boiling a bit of water in the pan.

You’ll get the best results by cleaning the pan when it is still a bit warm, as letting it cool lets food stick and soaking it can ruin the seasoning. Towel dry it after cleaning, and then immediately oil it lightly with a layer of vegetable oil, wiping away thoroughly any excess oil. This tops off the outer layer of seasoning – clean the pan this way every time and you will only have to do a thorough re-season occasionally.

And remember don’t use steel wool unless it’s necessary, such as when removing rust. If it comes to that, use a bit of warm water and dish soap to scrub away all the rust, and them immediately re-season.

Skillet, frying pan, and sauté pan are just the terms used for same cookware. Skillet has long handles and gently sloped edges. You may not find lids in most skillets but you can buy them individually.

Cast iron skillets generally have a helper handle on opposite site because they are a bit heavy. On the other side, sauté pans are usually deeper and have slight edges. They are versatile for any cooking style which needs liquids like sautéing and frying.

We all know the struggle of getting our kids to eat healthy. Preparing veggies in a way that looks … END_OF_DOCUMENT_TOKEN_TO_BE_REPLACED

If you have kids, the last thing you probably know is how hard it is to get them to eat veggies with … END_OF_DOCUMENT_TOKEN_TO_BE_REPLACED

Who Is Fellow? Tea kettles are pretty hot on the market these days with a younger face added to … END_OF_DOCUMENT_TOKEN_TO_BE_REPLACED

Pullman pans are just fun to use, and they make for a pretty impressive loaf when you bring one to … END_OF_DOCUMENT_TOKEN_TO_BE_REPLACED

Bread loaf pans. Not exactly a thrilling topic — until you slice off that fresh bread with its … END_OF_DOCUMENT_TOKEN_TO_BE_REPLACED

A sourdough starter is not required for this bread. If you do not have one, just double the amount … END_OF_DOCUMENT_TOKEN_TO_BE_REPLACED