Mmm, doughnuts. There’s no better way to start the day than with a hot cup of coffee and a couple of donuts.

Want to make your own? Mix up a sweet enriched dough, let it rise, then you encounter the first problem: rolling out a super-sticky dough. Some recipes say to use a ton of flour, others say to roll the dough between two sheets of parchment, but no matter what, this is a serious pain. Cutting the doughnuts and moving them to a tray is no picnic either. Now you’re out of the woods, right? Nope! After proofing, it’s time to fry. Get 2 quarts of oil up to 375° then maneuver the sticky dough into the hot oil without wrecking them or yourself. Oh, and you should be simultaneously preparing your glaze or other finish. Fry the doughnuts, glaze them, and bask in the adulation of your family for fifteen glorious minutes, then realize you’ve got to clean all of that up.

Or you can hand your favorite doughnut shop a buck.

In short, we leave doughnut making to the professionals for a reason. Nonetheless, you can make something that’s almost, but not quite a doughnut at home without too much trouble. An electric doughnut maker is pretty much a waffle iron with a doughnut-shaped plate that will bake you up a little cake that is pretty doughnut-like. A pedant like me will argue that it’s not a doughnut since it’s not fried, but a hungry pedant like me would love one of those little cakes, preferably with chocolate glaze.

Is another countertop appliance too much? Doughnut pans are a cheap and easy way to make those delicious little cakes in the oven. You don’t get the browning that comes from direct contact on both sides of the doughnut, but you can keep these under the oven next to the muffin pans.

Here’s What You Should Know About Donut Makers & Pans

The concept of an electric doughnut maker is pretty straightforward. Regardless of brand, you’ve got a folding device with a heating element on each side. In the middle are nonstick plates where you put the batter. When the batter cooks, it expands and fills into the top plate. Soon, you’ll have doughnuts.

For the electric doughnut makers, you should also look for a good, readable indicator light to show when it’s ready to cook. The feet should be stable on the counter, both when closed and when open. The last thing you need is to bobble the hot cooking plates when you’re filling it. Some models have a nice extra: different plates to do cake pops and other treats. A hidden benefit of these comes when cleaning, as it’s easier to clean the plates out of the machine.

In our quest for the best donut makers it was clear that there were only a handful of models that were worth testing. Most electric makers are junk and you’re better off modifying a muffin pan rather than using a poorly designed maker. In fact, when testing various electric donut makers, we discovered that doughnut pans did just as well (if not better) than their counterparts.  As a result, below we are recommending the pans we liked alongside the electric makers which worked.

The doughnut pans are even more straightforward. They’re like little muffin tins, but shallow and doughnut shaped.

In either case, you should consider capacity. The smallest model here makes 4 at a time, most make 7, while the pans can go up to 20 doughnuts (it’s easier to go big when a full-sized oven is providing the power instead of a little appliance). The quality of the nonstick coating should also be on your radar. You’ve got to be able to get the doughnuts out to properly enjoy them.

The nonstick coating is the critical piece of the puzzle for both makers and pans. If you lose it, you get cake wads instead of doughnuts. So treat it right! Use only soft tools on it to remove your doughnuts, like a silicone spatula. If you’ve got the dexterity, wooden chopsticks are really good at this. Only clean it with a soft cloth – nothing abrasive like a scouring pad. Also, when you first get it, wash the plates/pan really well.

The key to good doughnuts is to use the right amount of batter on every doughnut. Too little and you don’t get a good shape and it doesn’t cook right. Too much and it definitely doesn’t cook right and makes a mess. You’re going to have to practice to find the right amount consistently. I also recommend using a pastry bag to dispense the batter. That will let you distribute the batter all the way around the mold much better than you can with a spoon. 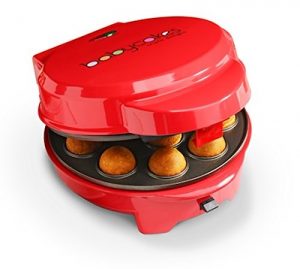 The Babycakes Multi-Treat Baker features interchangeable cooking plates, and can make 7 doughnuts, 7 cupcakes, or 12 cake pops. All are solid, but I never got the cake pops consistently right. There’s clearly an art to them that I haven’t mastered. I very much like that the plates are removable for easy cleaning, and I appreciate that they spent the extra pennies for two indicator lights. One shows the unit is on, the other indicates when it has heated to the proper temperature. 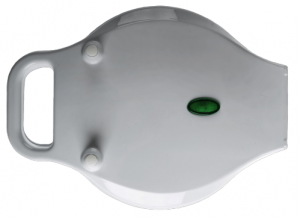 The Chef Buddy makes 7 doughnuts at a time. The best thing I can say about it, besides that it makes doughnuts, is that I like the way it opens wide. This was as easy as it gets to fill, with the caveat that the hard part is still to get the right amount of batter in each mold. On the downside, it feels pretty chintzy and comes with just one recipe. 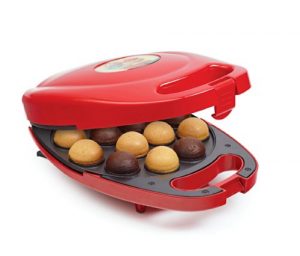 The purpose of a doughnut hole is to increase the surface area-to-volume ratio of a large doughnut so it can cook quickly and evenly in the oil instead of leaving an uncooked spot in the middle. Electric doughnut makers already make mini doughnuts and aren’t frying in oil, so the hole is mostly just for looks. This model dispenses with the hole in favor of making a dozen “doughnut holes”. Or cake pops, depending on your recipe/inclination.

The build quality is solid, and I generally had a good experience working with this model. I did notice a bit of difference between the doughnut holes on the outer ring and the ones in the center, but nothing too drastic. 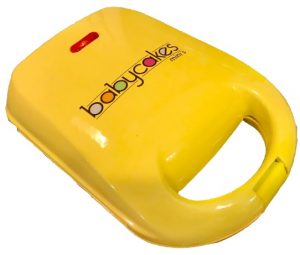 On the downside, this makes 4 doughnuts. Yep, four. You’re going to be making a lot of batches. On the other hand, your plate-to-doughnut ratio is higher than other models, so it retains heat well. Later batches come out a little better than other models in our roundup. I’d say it’s not worth the trouble. 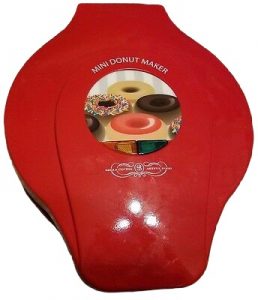 This product makes 7 doughnuts, and does a reasonable job at it. The big downside is the price. I was hoping for something extraordinary here, but I can’t say the doughnuts this unit produced were any better than the others in this roundup. 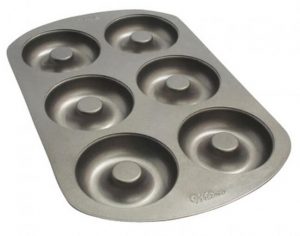 Two versions here – you can either get two 6-doughnut pans or one 20-doughnut pan. As my waistline would tell you, I’m more of a 20 doughnuts sort of guy. This worked really well, but even with a new pan I can see that release is going to be a problem. Grease the pan really well and protect that nonstick coating!

This is a set of two 6-doughnut silicone pans. I was hoping for a perfectly nonstick surface, but didn’t quite get it, though I think they’ll last a little better than the metal pans. I recommend you set these on a half-sheet pan to load them up, and keep them there to get them in and out of the oven. 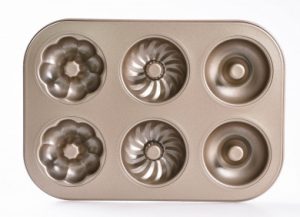 Sometimes the doughnuts should look pretty. My batch released better than I expected it too, and the patterns looked good. I would consider this pan to be expendable, though. As soon as the nonstick coating starts to degrade, it’s all over. Good thing it’s cheap.

Conclusion about purchasing a product for making donuts at home.

There’s a place down the street from me that does the most amazing old-fashioned doughnuts. Crisp outside with tasty craggly bits, soft rich interior, and a great chocolate glaze. When I want doughnuts, I’m going there. None of the doughnut hardware in this roundup can match it.

Still, you can make some tasty stuff at home with the right gear. I recommend the Babycakes Multi-Treat Baker for an enjoyable brunch. If you’ve got a yen for cake pops and the willingness to get the quantities and times down just right, it’s even better. The Wilton pan is also a nice option at a reasonable price. It’s also easy to store and easy to clean.

Fried is better, but I’ll overlook that in exchange for a double-chocolate baked doughnut.

Capacity – First of all, you should consider the capacity of donut machines. Some models are designed to make round donuts while some allow making delicious filled donuts and cake pops.

Choose a donut maker with multiple removable panels to try your hands on appetizing sandwiches, crunchy waffles, and finger-licking burgers. Simply add the panel you need and add your ingredients to make a yummy dish. A donut maker can usually bake up to 6 to 12 donuts in each batch according to the donut diameter and dimensions of cooking surface.

Some brands are known to increase capacity but they need to compromise donut size. We prefer the solutions that produced donuts with a diameter no less than 2 inches. This is another reason why we favored the pans to the makers. None of the makers produce donuts over 2.5 inches in diameter. When it comes to doughnuts, bigger is better.

Preparation Time – Another important point to consider is cooking time. A donut maker usually takes 3-5 minutes to turn the dough to the finished product. Using a pan in the oven you’re looking at about 10 – 15 minutes. The cooking time depends mostly upon the density and composition of dough and amount of browning you need. So, it is worth to take at least a few minutes to heat up your donut maker.

Usability – Last but not the least, usability is the most important consideration. The key here is to make delicious desserts with least efforts. You will enjoy the benefits that non-stick coating provides to fry donuts with less fat and oil. 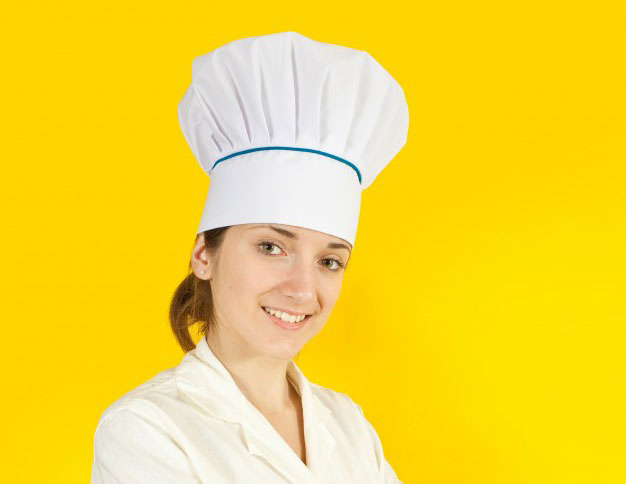 Choosing the best set of knives for your kitchen can be a tricky problem. You can save time and … END_OF_DOCUMENT_TOKEN_TO_BE_REPLACED

Electric skillets are making a comeback from their heyday in the 60s. An article published in 1955 … END_OF_DOCUMENT_TOKEN_TO_BE_REPLACED

These days, ceramic knives have become the top choice for many households. These are not just … END_OF_DOCUMENT_TOKEN_TO_BE_REPLACED

Making bread at home is a process, so it makes sense to have a quality bread pan to ensure the final … END_OF_DOCUMENT_TOKEN_TO_BE_REPLACED

Life without a pizza stone is no life at all. How do you get through the day to day without the … END_OF_DOCUMENT_TOKEN_TO_BE_REPLACED

Reviewing and Comparing Only the Top Muffin Pans to Buy Why get a muffin pan? The most basic … END_OF_DOCUMENT_TOKEN_TO_BE_REPLACED