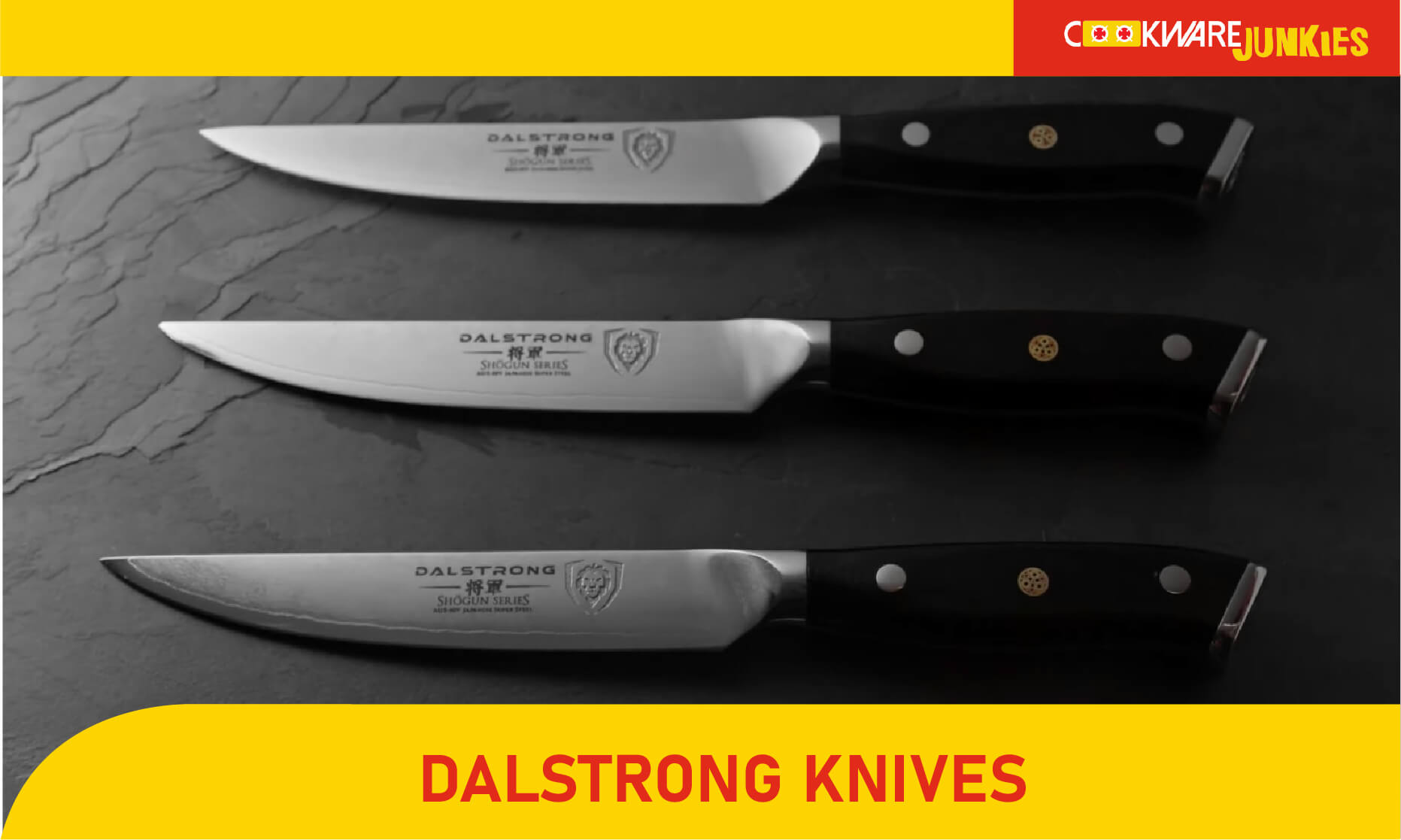 Dalstrong is a knife brand that is pretty unique to the sheer variety they sell and has a lot of press because they’re offering quality knives at lower prices. Their affordable price-point is much of the reason why we ranked these knives so well in our knife testing. They also have some hidden faults that most home chefs don’t know about that will help you to determine if Dalstrong is right for you. 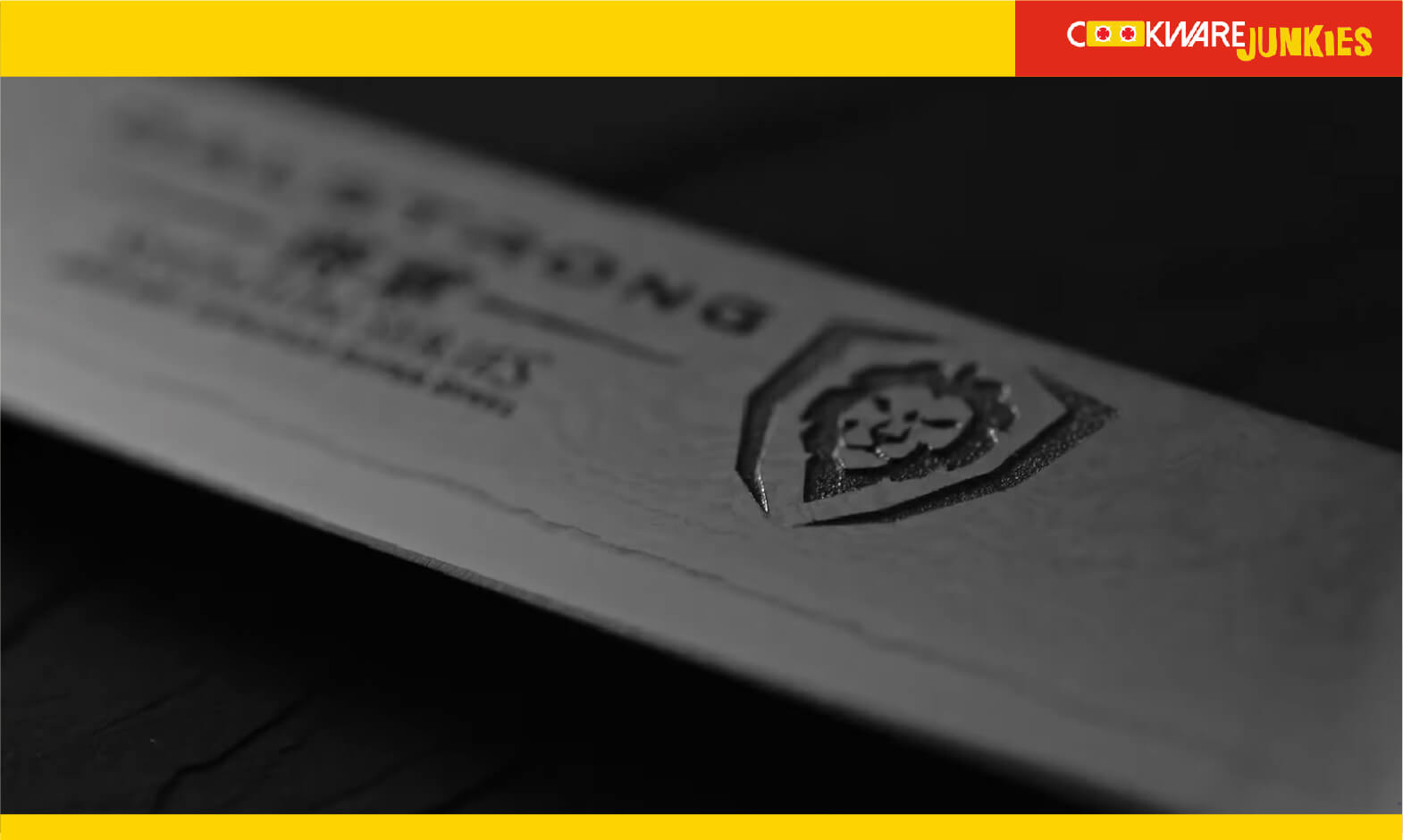 The company is based in Canada and has been around since 2012, but aside from master class knives including Wusthof and Zwilling, the Dalstrong brand is making big waves. Most people might not realize these knives are coming from China, but that’s the lower-hanging fruit that we’ll get into later. The real issue is whether or not it’s going to be worth your money to buy Dalstrong knives.

Now, if you know anything about Wusthof, you’ll know they’re worth every bit of the salt they’re worth. They’re made in Solingen, Germany, and are very pricy no matter if you buy them one by one or in a set. They have a rival known as Zwilling that is also running neck and neck with them. They equally have excellent knives but have expanded into a mass-produced market.

Zwilling has even built factories in other European countries to meet the demand for their knives but still retains that the quality is very top-notch. You can easily tell if your Henkel knife is from Germany and they do this on purpose. If you buy a Zwilling knife from Germany, it’s called Henckels, but if this is from Spain or Thailand it’s given the Henckels Twin label.

Henkels also sells a Miyabi Japanese-style knife that’s made in China, which got a lot of flack from the dedicated hoard of Zwilling knife puritans. Actually, the Miyabi knife is made to the specification that Henkel wants, so there’s no cheating on their behalf. It’s simply a cheaper produced knife that would have cost a fortune if it had is produced in Japan. Just so you have an idea how far Henkels will go to ensure quality.

When it comes to Dalstrong however, they also have earned loads of praise for their knives keeping an edge and being built from quality steel. But for general usage in your kitchen, how well do they measure up? Here’s more info to ponder:

Do They Have A Full Tang? 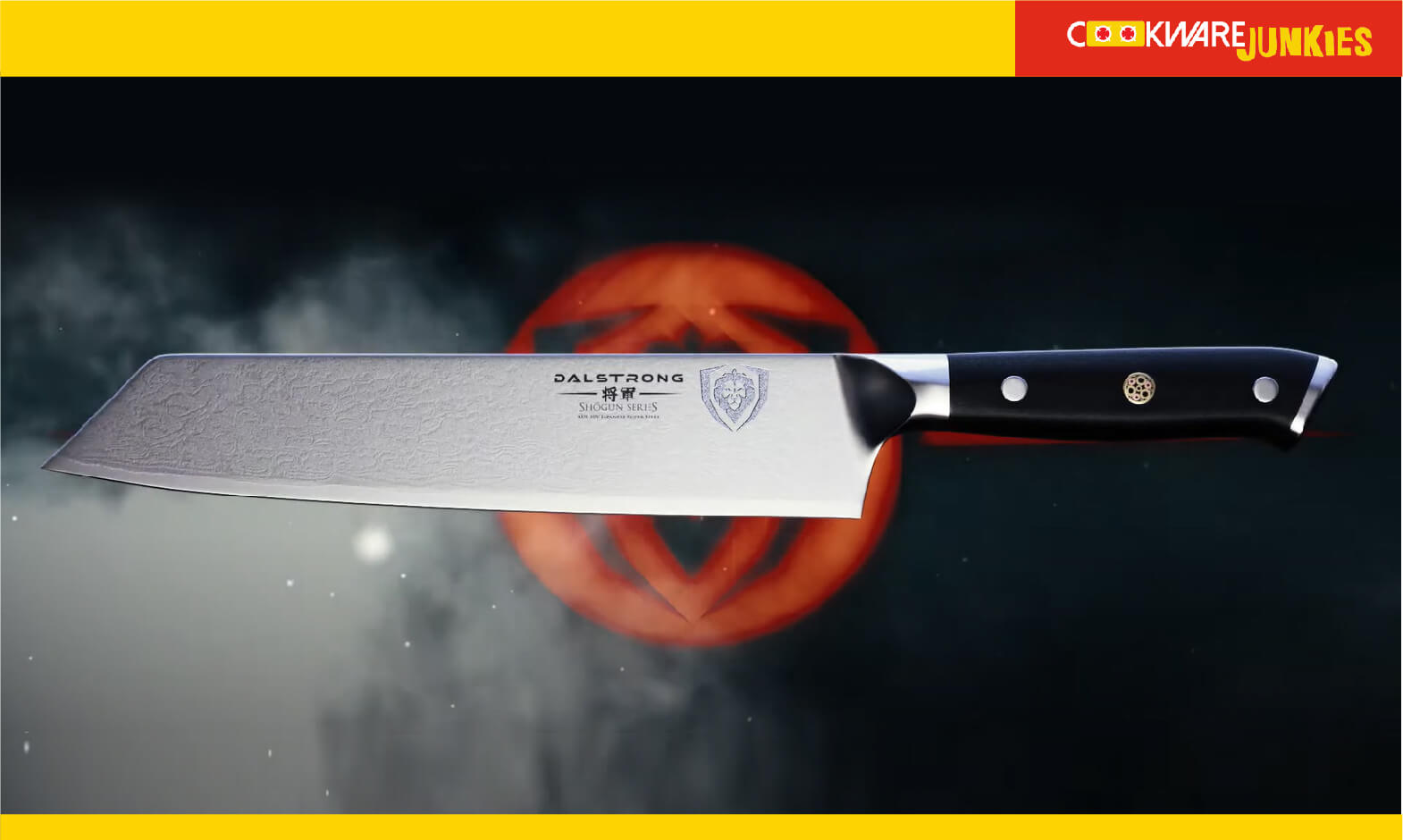 All of the Dalstrong knives come with a full tang that runs all the way through the handle. This is something that cheaper knife companies try to cheat and will give you something substandard that is usually sold in Target. They use a variety of steel that is sometimes German Steel and also Japanese, but this varies from each collection and the type of knife they sell.

The handles on all their knives are all attached with rivets, which is also a nice touch. As far as the handles, they use synthetic materials, stainless steel, and wood that is also determined by the set that you buy.

How Well Balanced Are They? 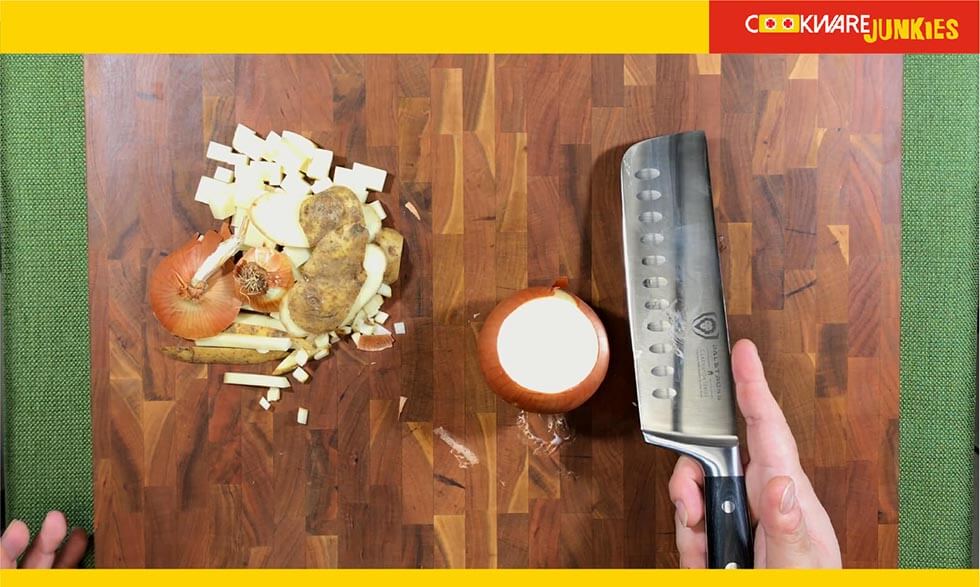 This is where the Dalstrong knives start to get murky in their professional performance. Unlike top-scoring knives, you can immediately feel the balance of a good knife by holding or pinching the knife at the very top of the knife guard. This is where the blade meets the bolster, but slightly before the handle. This little section should ideally feel like a balanced blade based on the length and the shape of the knife itself.

Dalstrong knives are really off-balance and are heavy on the back end. You might say this will make it more difficult to position your hand to create the right balance you need for cutting. As every trained professional will tell you, you have to place your fingers at the edge of the bolster and knife blade to get the best balance. This is so you continually have the knife blade gravity angling blade downward or upward.

Henkels does the same with their knives on purpose so that the gravity always pulls the back of the handle down so you don’t get carpal tunnel syndrome. Since Dalstrong knives also do this, it makes the balancing more problematic if you get a downward chopping knife. If you know how to hold a knife properly, you can counter this effect easily enough, but as an everyday kitchen warrior, it might be an issue you’ll experience.

How Well Do They Keep Their Edge? 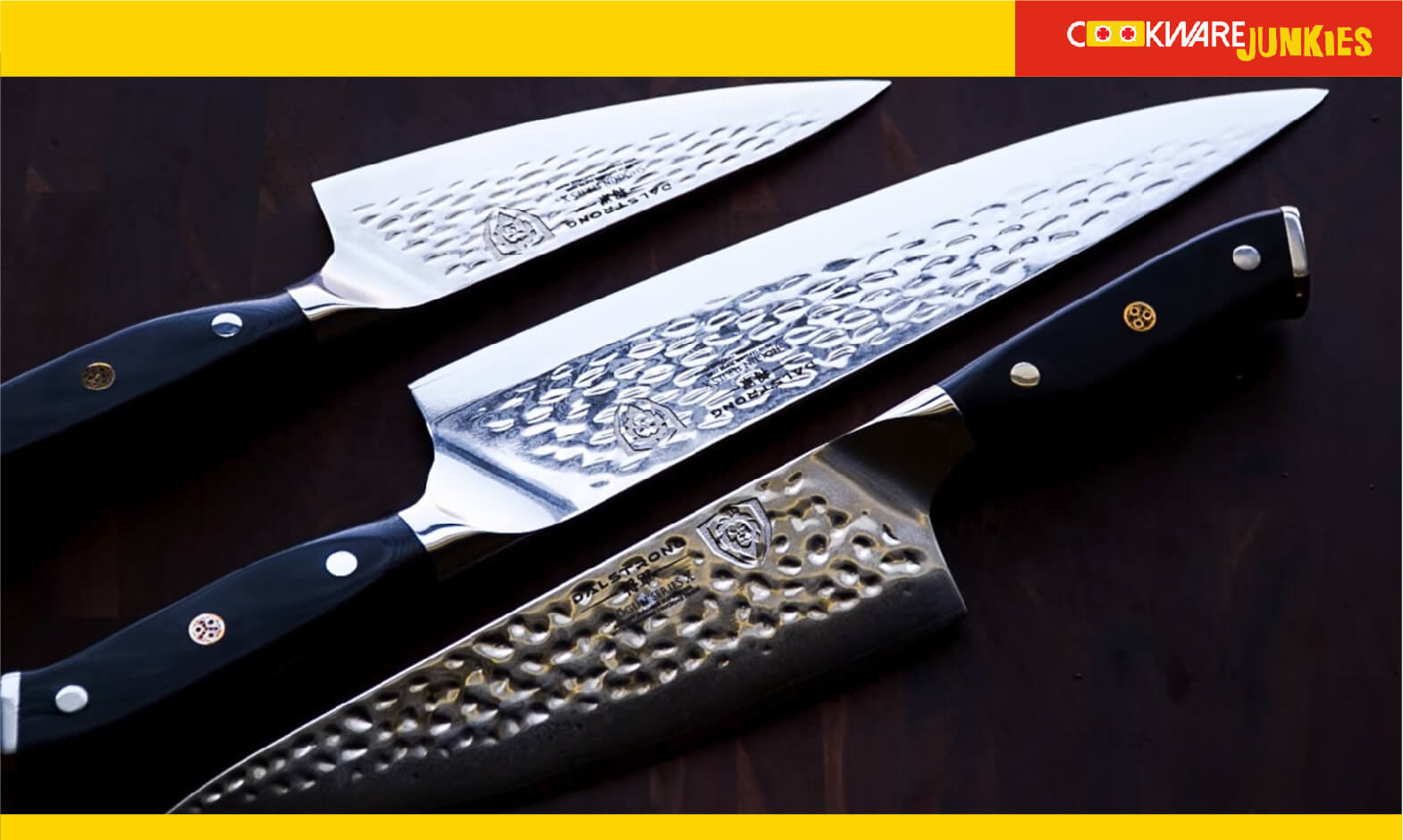 Since the most important thing about your knife is going to be how well the blade keeps its edge, it comes down to the steel that’s used. Dalstrong knives are using either German or Japanese steel and come in a range of hardness that might just be shocking to you. For example, all of the Wusthof knives have the same steel hardness that rates at 58-60 Rockwell. Your Dalstrong knives will range anywhere from 55 to 62 Rockwell for hardness.

This sounds crazy at first until you realize that many of their sets are designed to be used for specific types of usage. You might get harder or softer steel depending on that style. But if you don’t know how to sharpen your knife, you’ll be perplexed as to why it’s more difficult to have harder steel. A softer steel is easier to sharpen and typically takes two to three passes on your honing rod to align the steel edge.

Most people think you’re sanding the steel to have a sharp edge when in fact it just making the tiny steel flakes you can’t see stand in-line along your knife’s edge. The edge sharpened for all Wusthof knives all have 14 degrees (each side) no matter the model you choose. With Dalstrong, you’ll have 8-10 degrees (per side) for the Shogun series, 12-14 degrees for the Phantom series, and 16 to 18 degrees for the Gladiator series.

The sucky-side about the Shogun series means that your knife edge is very sharp but will be a pain in the butt to keep sharpened to that angle all the time. Even if your knife is harder steel, this makes it 2 or 3 times more difficult to sharpen by yourself. In fact, Wusthof makes their angle 14 degrees because this is highly effective and easy to maintain all the time. Besides that, what is the purpose of being able to slice tomatoes as thin as rice paper?

Do They Have A Good Warranty? 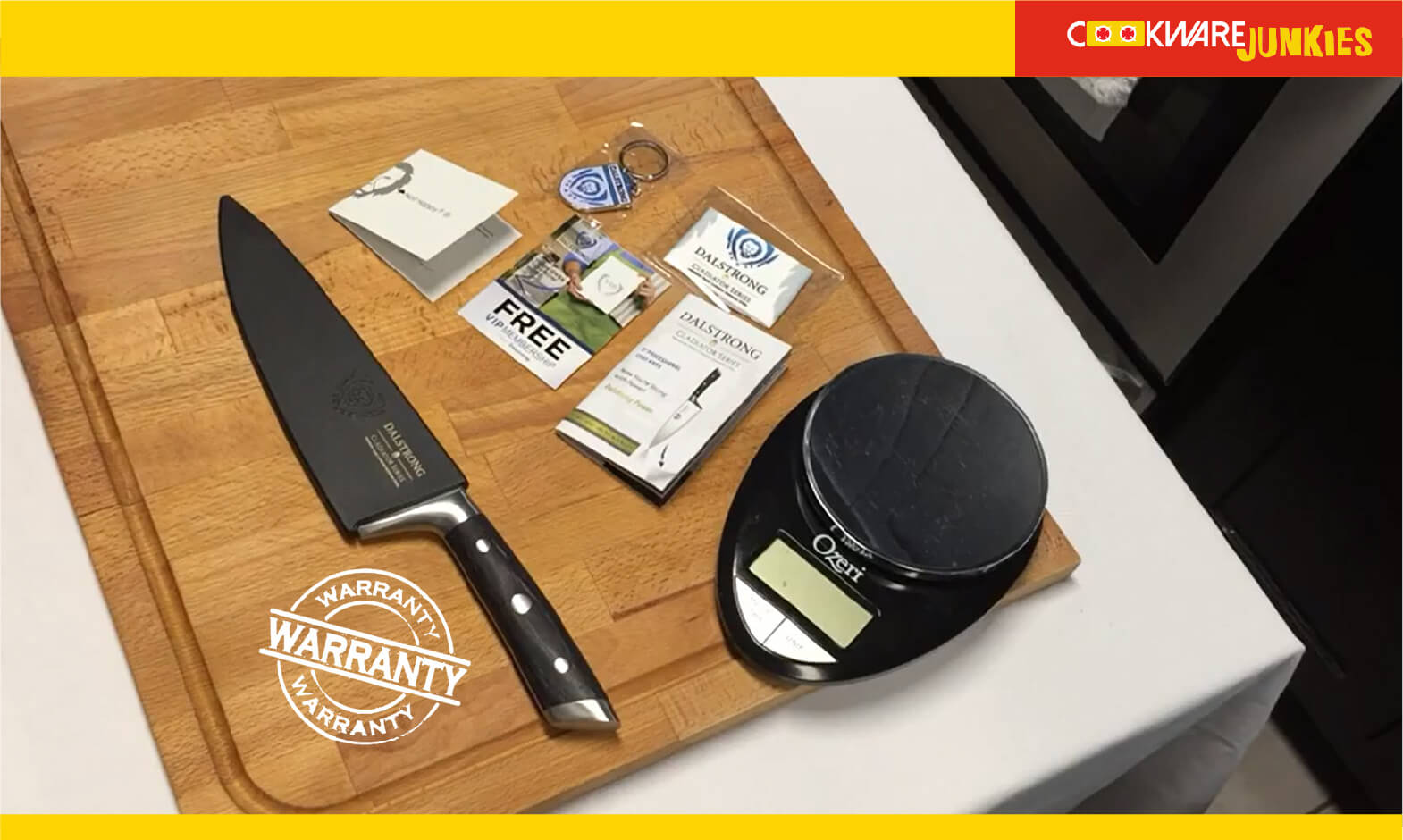 You’ll notice that Dalstrong has an army of public relations aka (customer service) representatives to ensure you don’t have anything bad to complain about. They’ll find a way to replace your knife if there’s a problem which is what we’ve all been conditioned to believe. Actually, if you have a problem with Wusthoff, is so quick to uphold their name and will replace any knife right away.

Zwilling is almost the opposite and might take a couple months before they respond to your claim. Since Dalstrong is putting its name in front of everything else, your customer service experience will be nothing short of 5-star service. It’s also a lifetime warranty that makes this knife attractive for today’s ‘I want results right now’ generation. Being that Dalstrong is a Chinese brand, they’re working hard to gain your confidence from the start.

As we mentioned before, it’s a brand that is from Canada, made in China and has quality metal that’s German and Japanese. While you might have your reservations, the asking price is hard to pass on when you’re looking for quality. Unless you have family money to spend for the Wusthoff of Zwilling names, Dalstrong has somehow carved a niche for themselves in a very short amount of time.