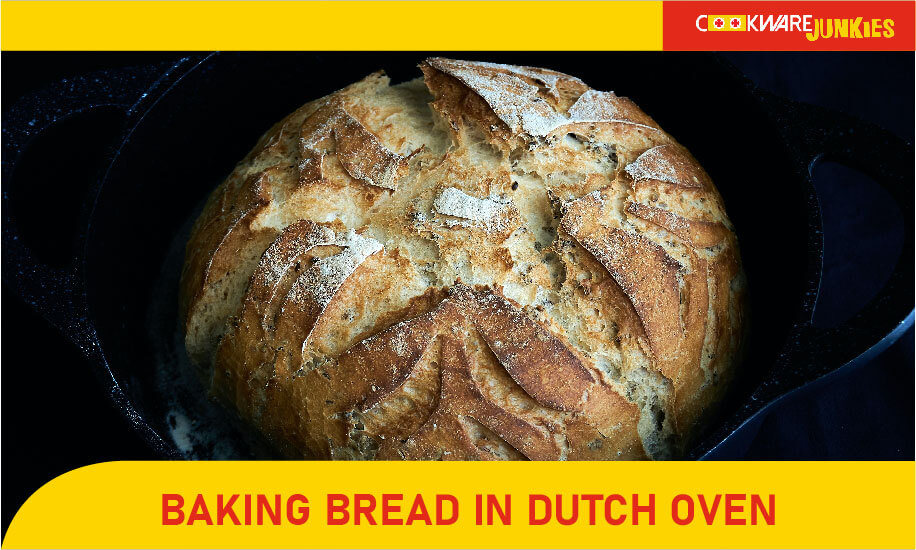 Baking bread at home is one of the most rewarding trends that became a healthier alternative to buying bread at the store. One of the oldest methods that you never hear about is using a Dutch oven, making all of those breads you can imagine baking.

Can You Bake Bread In A Cast-Iron Dutch Oven? 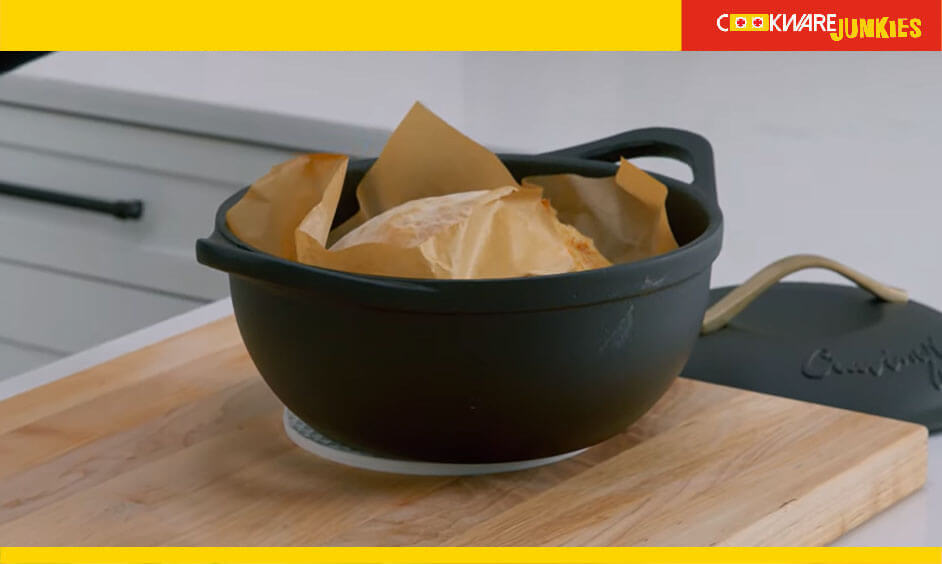 You can bake bread inside a Dutch oven but are limited to the amount of space that your cast-iron pot allows. The advantage of baking in cast iron over a traditional baking pan gives you better control of humidity. There are considerations that you’ll need to observe when baking breads likewise. This is why there are rules that you need to stick to if you want to pull off the baking process and get the best results.

What are the essential rules?

There are just a couple of rules that you need to know about that will solve some obvious problems. The first problem is the expansion of your dough and this will need to be controlled inside a Dutch oven pot. Bread dough likes to expand when it’s rolled into a ball due to the gas that builds inside of it. To curb this problem you score the top of your dough so the expansion only comes from the top.

This way, the expansion is now coming from the rise of your bread rather than the expansion that can come from the dough’s girth. There is also a natural burst of rising dough when you initially put your dough into the oven. This is called Oven Spring’ and is the last stage that dough goes through before the crust begins to get crisp. Another rule that makes baking bread in cast iron includes using parchment paper.

Breads that are baked inside a Dutch oven are easier to remove when the dough is placed onto parchment paper beforehand. Many experts recommend that you spritz the paper or run the paper under your kitchen faucet to moisten it. This allows the paper to be a bit more flexible but also adds a bit more moisture for added steam. The steam helps to make a crust that helps your bread to become crispier as it bakes.

What Temperature Should I Bake Bread In A Dutch Oven? 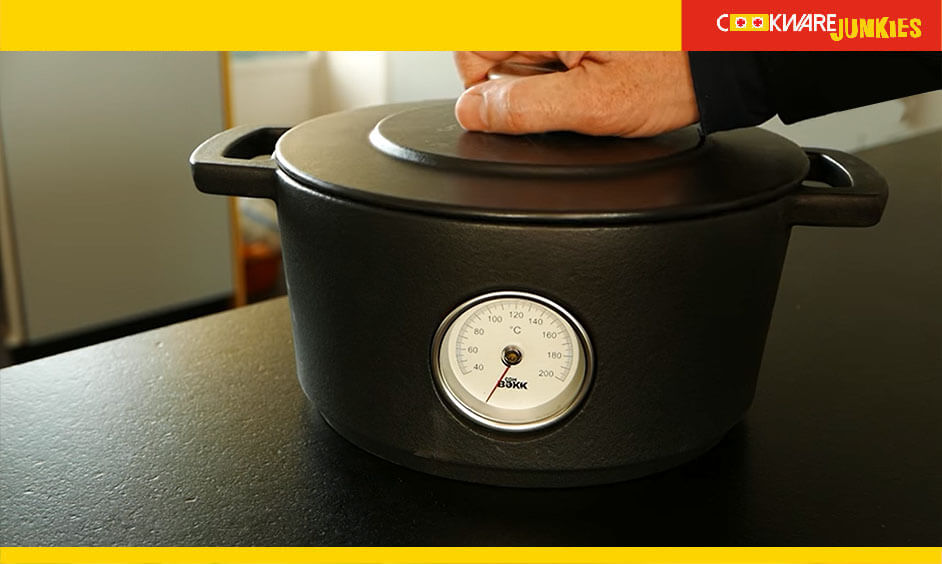 The temperature that is pretty common for baking bread is commonly 450 degrees Fahrenheit for all Dutch ovens. These cast-iron pots need to be preheated in your oven to reach this temperature so you can place your dough inside right away. The resulting steam that comes from inside the dough allows the outside to remain softer while it bakes. As the starches and natural sugars begin to caramelize on the surface, the dough becomes glossy.

This is the same look that you see from professional bakeries which have smaller rounded loaves of bread with crispy and flaky crusts.

Do I bake bread covered or uncovered?

Baking any kind of bread in a cast-iron Dutch oven can include covered and uncovered pots. What will happen determines how the exterior of your baked bread will appear in the end. Depending on the bread recipe that you follow, you’ll need to have a cover available if it calls for the dough to be covered. Without the cover on your pot, the amount of steam that can escape will prevent the surface of your bread to become glossy.

It can also keep your bread from rising more than it would when you place your dough inside a preheated Dutch oven. No matter how the dough goes into your pot, you’ll also need to score the top of the dough so it can control rising better inside a confined space.

Do you preheat Dutch oven with lid?

What might sound like a trick question is better to answer than other bread baking sites like to admit. You heat these two elements together but in separate spots inside the oven. Your lid should be placed on one rack while the pot is on the lowest rack. Both your cast-iron pot and lid will reach their temperature as they preheat. Since cast iron retains heat so well, you’ll need to have well-insulated oven mitts so you don’t get burned!

Even when you put your dough inside the pot, the edges of the pot are still very hot too, so be careful of how you drop your dough inside the vessel. This is why some bread bakes like to put their dough inside a large piece of parchment paper to use as a handle. This helps to lower the dough into the pot and you won’t get burned while you pull out your pot temporarily. Then return the lid to the top and return the pot to the oven to start baking.

Can I Bake Bread In Enameled Cast Iron? 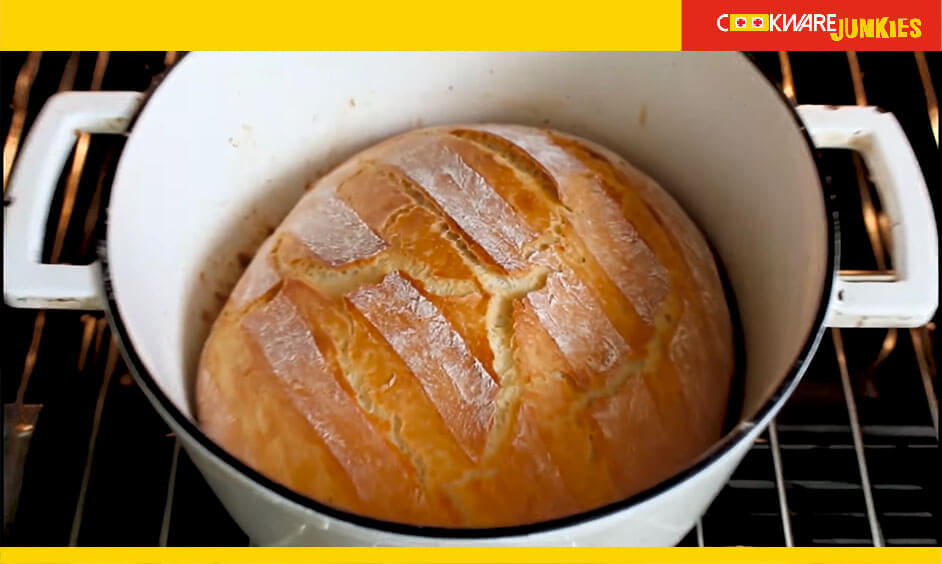 Enamel surfaces are fine for your Dutch oven as long as you’re not exceeding more than 500 degrees Fahrenheit for baking. The same applies to any seasoned surface that has oil that can potentially smoke even after a pot becomes seasoned. In general, enameled cast-iron pots are perfectly fine for baking bread. The only problem is that you need to be extra careful to not expose your pot to cool air right from the oven.

The drastic temperature changes could cause the ceramic coating on the inside of your Dutch oven to crack. This typically won’t happen if you keep your pot close to the source of heat, which is why you’re better off having parchment paper wrapped under your bread to grab it out quickly. Another good example is to use metal salad tongs to grip the sides of your bread to retrieve it right from the pot.

Once you get your bread out from the pot, return it back into the oven so it can gradually cool down after you turn off the oven. It will take a couple of hours before you’ll be able to touch this pot without being burned. This is when you can clean it out it if needs cleaning inside. You should only use a soft sponge and warm water to clean out the inside and then use a towel to dry off the remaining water anywhere on your cast iron.

How Do I Make Bread Not Stick To A Dutch Oven?

Breads that are baked in a Dutch oven will all have different levels of stickiness due to the recipe that’s called for. You don’t often have a dough that is overly sticky since the hydration of your dough needs to give you a surface that doesn’t stick to your hands once the dough has had a chance to proof. But when it comes to transferring this dough into your pot, you want to have a little extra help to prevent your dough from sticking. Here are some tips:

As you allow your dough to rise, it needs to sit under a dry towel. It shouldn’t be allowed to sweat since this will prevent the dough from forming a crust on the outside. As it proofs and expands it should remain nice and dry and will help further with your dough not sticking inside the pot when it starts baking.

Use the right size Dutch oven

Never use a cast iron pot that isn’t big enough to hold your dough and gives ample room for the final rise. You want to avoid the sides of your dough from touching since this could further keep it from coming out easily. This is another reason to make a bread loaf that’s approximate to the size of your pot and still has enough room for it to expand even with the lid placed on the top.

When your dough is transferred to the pot and you start to bake it, the dough goes through a final rise. After this is when you should vent the lid on your pot to release excess steam. This helps releases the bottom of your bread easier with a drier interior and lets the base of your dough pop up as it’s baking. When you return the lid after a couple minutes, steam builds up again and helps to make the outside of your bread glossy and crispier as it bakes.

Why use parchment paper

Parchment paper used for baking is a great way to create a non-stick surface between your cast iron pot and your dough. This paper is ideal for cooking and doesn’t burn very easily even when used on a cookie sheet at high temperatures. It can become softened using a little bit of water so you can cradle your dough while transferring it into your Dutch oven. It also keeps it from sticking while it bakes and comes out by grabbing the edges of the paper.

Cornmeal has been used forever in bread making and makes a great non-stick surface that helps circulate air with all the granules underneath your dough. As your dough bakes the cornmeal helps support your bread making it easier to remove once it gets baked. You can also use rice or semolina flour alternatively.

Use oil or not?

You could also use a small amount of oil rubbed onto the bottom of your Dutch oven but you have to use oil that has a higher smoking point than the baking temperature. If your oil starts to smoke, this will make your bread taste terrible and give it an off-putting flavor. Don’t use oils that aren’t recommended for high temps due to this reason

We all know the struggle of getting our kids to eat healthy. Preparing veggies in a way that looks … END_OF_DOCUMENT_TOKEN_TO_BE_REPLACED

If you have kids, the last thing you probably know is how hard it is to get them to eat veggies with … END_OF_DOCUMENT_TOKEN_TO_BE_REPLACED

Who Is Fellow? Tea kettles are pretty hot on the market these days with a younger face added to … END_OF_DOCUMENT_TOKEN_TO_BE_REPLACED

Pullman pans are just fun to use, and they make for a pretty impressive loaf when you bring one to … END_OF_DOCUMENT_TOKEN_TO_BE_REPLACED

Bread loaf pans. Not exactly a thrilling topic — until you slice off that fresh bread with its … END_OF_DOCUMENT_TOKEN_TO_BE_REPLACED

A sourdough starter is not required for this bread. If you do not have one, just double the amount … END_OF_DOCUMENT_TOKEN_TO_BE_REPLACED