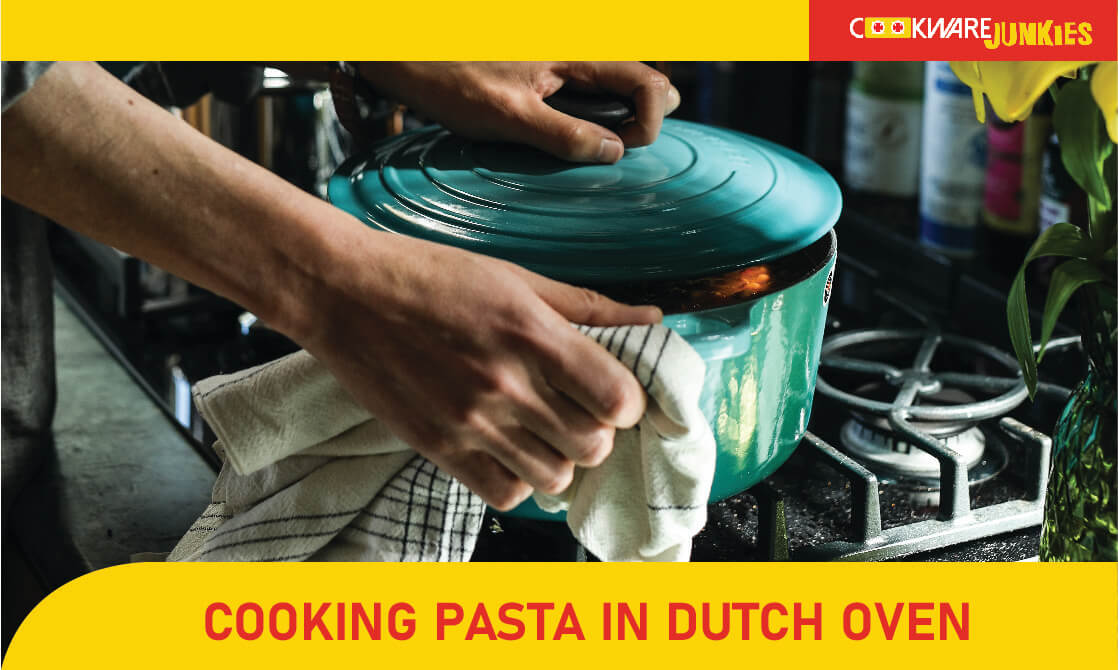 Cooking pasta is a common task in your kitchen, but have you ever considered using a Dutch oven for this mundane task? You might be interested to know there are great advantages to cooking pasta and sauces in a traditional Dutch oven and we want to tell you why.

Can You Cook Pasta In A Dutch Oven? 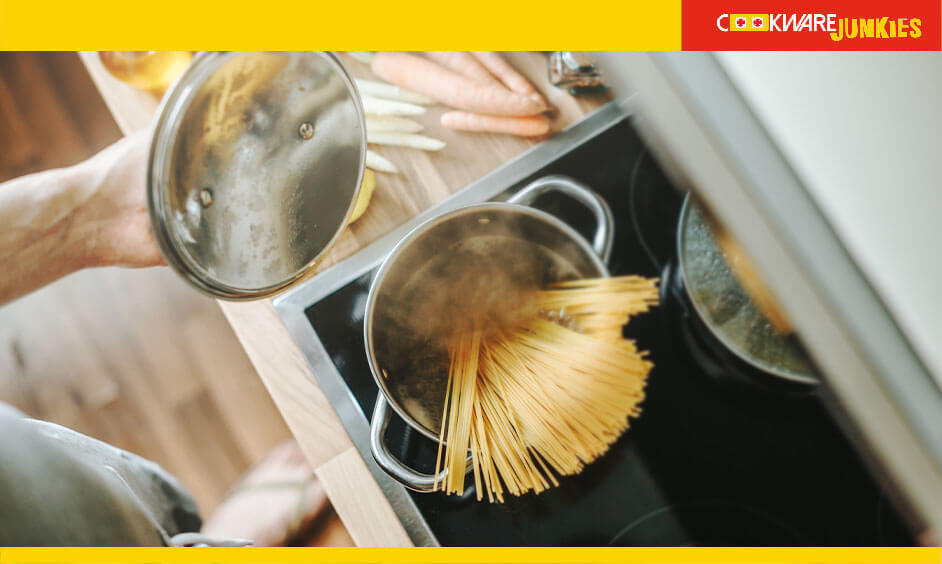 Just like any other vessel that you bring water to a boil, a Dutch oven is perfect for cooking pasta. Since these pots are also perfect to create sauces, they’ll be ideal to add your pasta once the sauce is cooked. But some issues often come up about the type of Dutch oven that you’re using. Since this is focusing on cooking pasta, let’s examine the biggest issue that you can face.

The first problem shouldn’t be a big deal but will be an issue for those who own a cast-iron pot that’s been seasoned. This is the special oil coating that covers the inside of your pot so it provides a non-stick surface. So you have to be asking yourself, why is this so terrible to cook pasta in your pot? To answer this question, this requires a little bit of understanding of how Dutch oven seasoning is prepared and why it’s so good for coating inside cast-iron pots.

In addition to that, when you cook pasta, you’re putting oil into the water so your pasta doesn’t stick together. Yet, when you add water or any kind of liquid inside a seasoned pot, it should be perfectly fine. But that’s not always what happens when you use the wrong type of oil that may have a lower tolerance for heating. It also depends on the kinds of foods that you’re preparing in a Dutch oven that can ultimately be covering up a hidden weakness.

What you shouldn’t cook in a Dutch oven 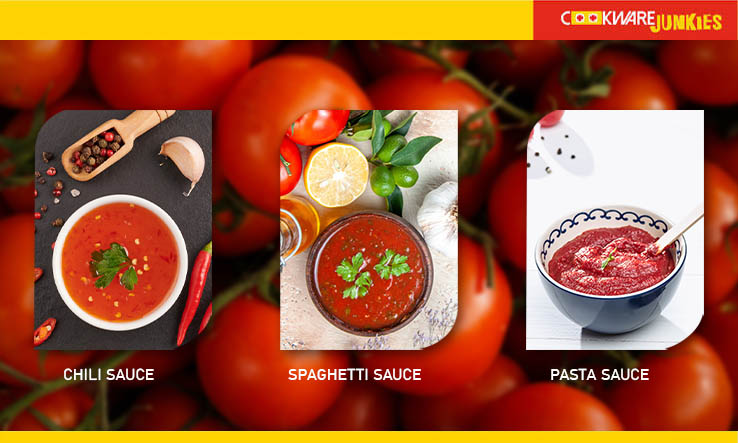 Pasta dishes are great when you add tomato sauces and aren’t limited to using tomato as a base ingredient. If you’re using a Dutch oven to make chili, spaghetti, and pasta sauces, in a cast-iron pot that’s seasoned, It’s slowly attacked by the acidic nature of tomatoes. We don’t often think of a tomato as being as acidic as a lemon or orange, but you would be completely wrong.

While lemon is truly acidic, an ordinary tomato is alkaline and is closer to your car’s battery acid than anything else. This is why they’ve proven that ordinary salsa can eat through iron bars with just the right amount of alkaline liquid. Now, imagine what this can do after cooking tomato-based sauces inside your Dutch oven does each time you use it. Yet each time you season the inside of your pot, this is only covering up what may flake off later.

Some people may have noticed very tiny flakes that at first glance could appear to be spices or additives, but in actuality are minute flakes from your cast-iron seasoning that have fallen off due to the previous seasoning layers that were previously weakened by something acidic. Though this isn’t going to harm you a single bit, it’s because of your cooking ingredients that are causing these seasoning layers to become unstable.

This is why you have to be careful using certain ingredients that could be eating away at those seasoning layers you’ve already built up. 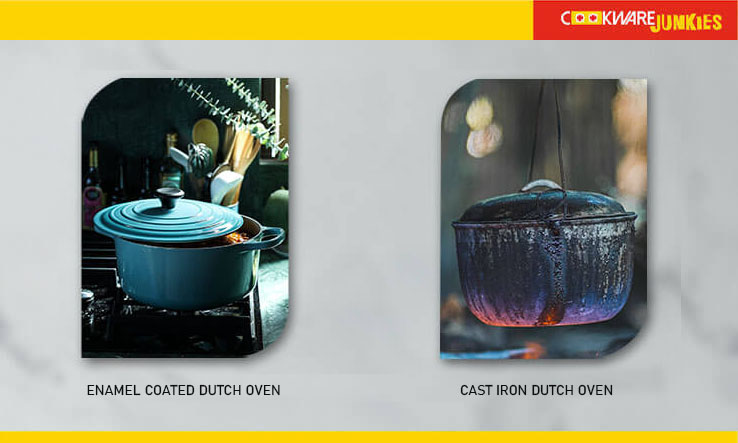 There is a big difference if you use a Dutch oven that has an enamel coating for cooking, and makes it non-stick and nearly impervious to acidic attack. This allows you to have a cooking surface that doesn’t need to be seasoned at all and will be great for cooking multiple kinds of pasta and sauces. Because this surface is protecting the iron, there is no risk of having a seasoning layer start to break down due to the heat or acidity of ingredients you use.

Boiling water starts at 212 degrees Fahrenheit and will not present a danger to any enamel coatings. Only when you start reaching 400 degrees Fahrenheit will enamel become compromised and can crack due to this level of higher heat. Normally, if you season your Dutch oven with oil, it should have a high tolerance for temperatures since the oil is burnished and then baked onto the inner surface at 400 degrees Fahrenheit.

But wait just one second before you make a terrible mistake! Rewind back to the part where you need to use oil that already has tolerance for higher temperatures. And this is the temperature that you’ll need to heat your oven to bake the oil onto any previous seasoning you’ve made prior. You can use this chart found here to find the maximum temperature that specific oils have for their flashpoints.

This is why the cooking temperature that you’re using for boiling water in a seasoned pot will ultimately affect the seasoned surface additionally. So always stick to an oil temperature that is well above 212 degrees Fahrenheit.

Can You Cook Pasta In Its’ Own Sauce Using A Dutch Oven? 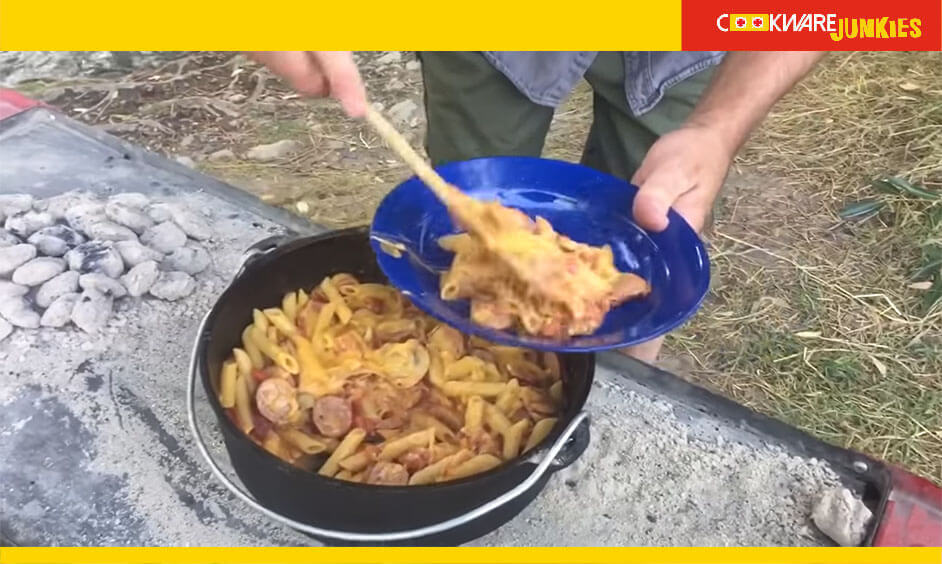 Many people never think that pasta tastes much better using vegetable stock and meat-based liquids. Pasta has two significant attributes that cause it to take on added flavors. The first is the heated liquid so your pasta cooks faster. And since pasta is already dried before you use it, your pasta absorbs that liquid, so anything flavored will be sucked into the pasta itself.

You can adjust a pasta sauce so that it contains more liquid so it will hydrate your pasta to the level where it’s reached the perfect Al dente texture. The only trick to this is that you have to schedule your cooking times to allow the right amount of simmering when preparing your sauce right before you add your pasta. If you need to simmer for longer to get the right thickness for your sauce, you could end up with overcooked pasta that’s too mushy and soft.

Always consider what the standard cooking time is for regular pasta and adjust this with enough time to coincide with finishing your pasta sauce. Then you won’t need to simmer down for so long to get your sauce to become thicker as a result.

Is It Ok To Boil Water In A Cast-Iron Pot? 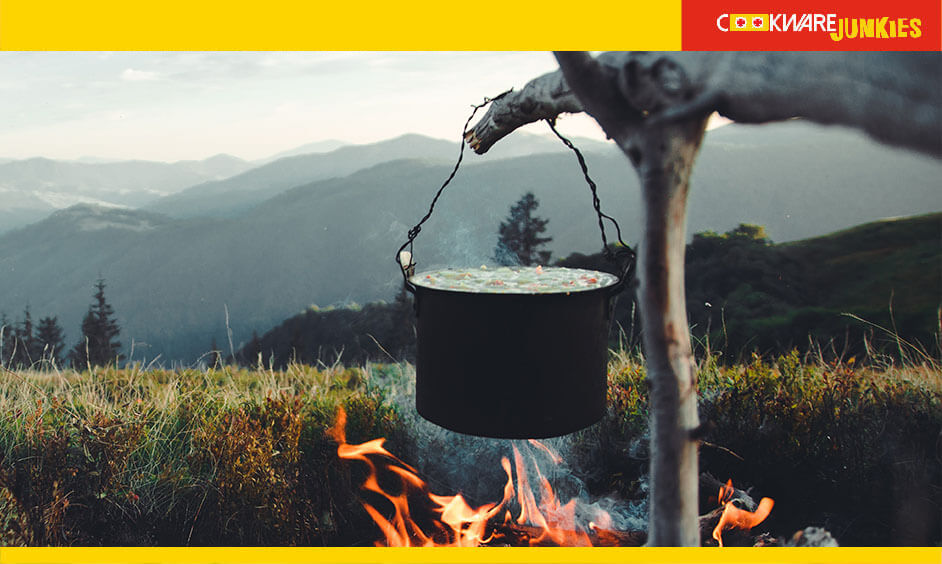 As mentioned before, it’s fine to boil water in a Dutch oven as long as you’re paying attention to using an enamel coating. If you start out with your sauce first and then decide to cook your pasta in the remaining liquid, this is also an alternative to boiling pasta in regular water. But aside from that, depending on the risk of loosening the seasoning inside a cast-iron pot you might be better off using a regular stainless steel boiling pot.

According to our good friend Kent Rollins, his recommendation is to not use seasoned Dutch ovens to boil water. However, this might have everything to do with the tolerance of your oil temperatures. That’s not to say that water simply boiling away in your Dutch oven won’t become weakened, it can also start to break down with liquids that are acidic in general. On top of all that, you also want to avoid cleaning your pots by boiling water to clean them.

The best way is to rinse them out using warm water and a soft sponge without any soap at all. Then you dry off your pot with a soft rag to clean off the excess water. Each time you use a seasoned cast-iron pot it needs to be re-seasoned so it keeps that non-stick surface.

Is Cooking Pasta Better In A Le Creuset Or Dutch Oven? 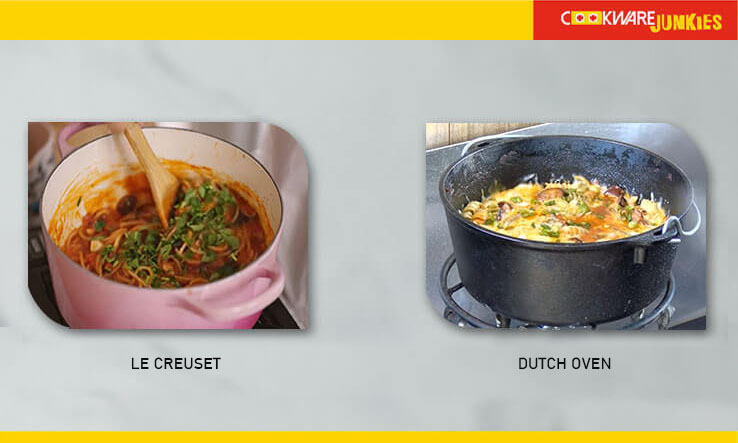 Long before the Dutch oven got its name, the French had a similar invention that was identical. These pots are also constructed from cast iron and have lids that come with them. Le Creuset also can include handles and feet that are designed to cook over an open fire or standing over hot coals. In recent years, there are Le Creuset pots that include enamel coatings so they are universal for braising, boiling, and cooking.

Cooking pasta in either of these pots is identical, so there is little need to worry about the enamel coating being damaged. Unless you have a pot that needs to be seasoned is where you’ll need to use a bit of caution while cooking pasta. 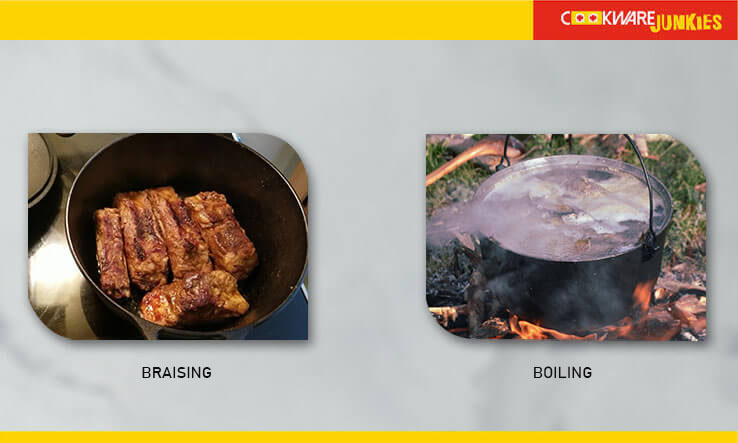 There have been countless recipes that recommend using a Dutch oven for braising meat inside a seasoned cast-iron pot. This also involves using a liquid that is added into the pot and is simmering for a few hours. So how does this affect the seasoning in your pot? Vegetable stock often contains onions, celery, and other ingredients that can be more alkaline than you imagine. These ingredients can also potentially eat away at your seasoning if they are acidic.

All of these problems go away if you’re using ceramic coatings or decide to use stock that has very low alkaline levels. That doesn’t isolate the problem 100%, so be prepared to re-season your pot after it’s used to seal the cooking surface for the next time it’s used. It’s better to be safe than sorry if you have a ceramic coating that will be ideal for cooking liquids only. This way you won’t need to worry about your seasoning being under attack.