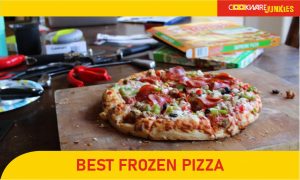 We’re all about cooking fresh here at Cookware Junkies, but not every night is going to be a home-cooked night. For those days when you don’t feel like going out, when delivery would take forever, and when you’re definitely not spending an hour making something, there’s a pizza in the freezer ready to go. Here’s a review of the Best and Worst Frozen Pizzas which we tested during our Pizza Cutter Test Kitchen.

Frozen pizza beats most frozen dinners since oven-baking can give you browning that a microwave can’t. If everything aligns so that your oven drives off enough moisture (usually true on the bottom, less so for the top), your pizza gets hot enough that the Maillard reaction creates tasty new flavors that we associate with browned food.

It’s a clever feat of food engineering to get a frozen pizza right. The idea dates back to the early 1950s to a patented method by Joseph Bucci where a flash-frozen crust gets covered with “an edible sealing agent” so the wet bits of the sauce and toppings don’t mush up the crust before it gets baked. All the bits of the pizza get some tinkering so you get a quality pie right out of the freezer.

How We Judged the Pizzas

Something to throw on when you rent a movie that doesn’t make you sad when you eat it. Even a sad movie should be paired with happy pizza. The Freschetta shown below was the highlight of our taste test.

The crust should have structure and flavor, with enough strength to hold up the pizza for proper eating out of hand. The sauce should have actual flavors, including those that actually resemble tomatoes and herbs. The toppings should taste distinctly like the thing they’re supposed to be and have an appropriate texture that benefits the pizza. The cheese should be tasty, gooey, and plentiful.

It goes without saying that we’re rating these against other frozen pizzas. Even the greatest frozen pie in the world will never have a crust like a fresh-baked pizzeria offering.

The Best (and Worst) Frozen Pizzas 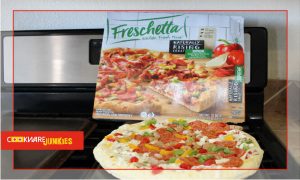 The Freschetta has a genuinely good crust that rises above frozen pizza, even if it’s a little squishy in the middle. The end pieces were great, with a nice fresh-baked yeasty flavor and a nice crunch. The sauce is tasty with a solid tomato presence and a little spice. The meats were especially good here, with a pleasant unctuousness. The vegetables were alright, but mostly just filler. The cheese was everything I wanted from a frozen pizza: flavorful and gooey, drawing the whole thing together. 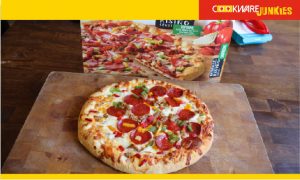 The Freschetta is the best frozen pizza in our test. I added a couple to my freezer last time I hit the store.

The Newman’s Own features a multi-grain crust, but it didn’t taste much different than the regular crusts. It did cook up very well, with a nice chew and a little char. The sauce is bright and full of tomato flavor. The toppings are not just frozen pizza-good, but genuinely good. The mushrooms are great. The cheese has a good flavor, but the texture is more crumbly than gooey, kind of like a sprinkled parmesan than a mozzarella. 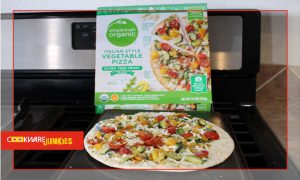 The crust on the Simple Truth is thin and crackery. It’s got a nice crunch, and isn’t disagreeable, but there’s not much substance to it, or flavor. The sauce is pretty tasty, and has a little flavor of balsamic vinegar in there. The tomatoes were great, and make me want to explore cherry tomatoes as a pizza topping in better circumstances. The zucchini is good, which is a real vote of confidence, since zucchini flavor is subtle. The other vegetables are pretty undistinguished. The cheese is pretty weak. The box advertises two kinds, but I taste about half a kind. 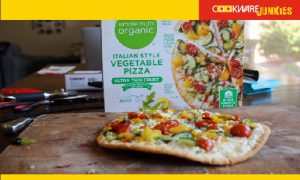 Overall, the Simple Truth was pretty good. It’s got a distinctive flavor, and it tries to go somewhere unique. If the cheese was better, it would have completely succeeded. 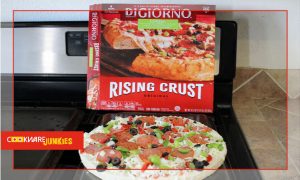 The DiGiorno’s crust was alright. It’s somewhat insubstantial and a bit short. There’s no chew or heft to it. The sauce has some interesting depths, but they’re all overwhelmed by the sugar that dominates the non-tomato flavor notes. The toppings were all OK, but not memorable. The pepperoni was especially bland and lean. The cheese tried its best to make up for everything else with great flavor, texture, and quantity. 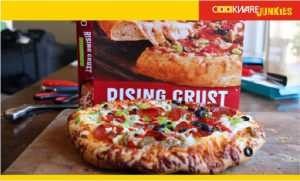 The DiGiorno was a reasonable pizza, but only the cheese was outstanding. 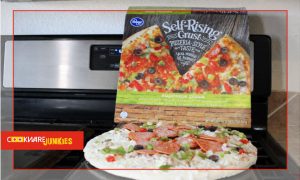 The crust is great on the outside, but mushy in the middle, mostly because it’s too thick to really bake right. The outside crust is good all the way through because it doesn’t have to fight the wet stuff on the main body of the crust. The sauce is really good too, with a little spice and a deep tomatoey flavor that reminds me of tomato paste. The toppings are the weak point: all a little bland and pointless. I’m not convinced I could tell the onion from the pepper blindfolded. The cheese is spotty but tasty, with a nice chew and pull to it that really helps the overall texture. 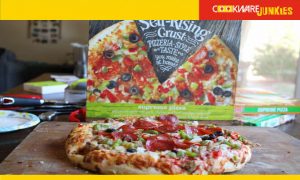 The Kroger is a good pizza that I would happily eat on a lazy evening. 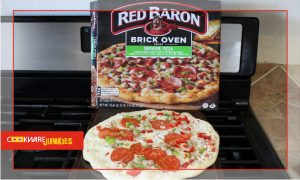 The Red Baron has a good layer of crust on the very bottom, but after that, it’s just chew without much flavor or texture. The sauce has one dimension: sweet. The toppings were the best part of the Red Baron, with tasty meats and bland vegetables. The cheese was incredibly disappointing. It tastes like nothing and doesn’t melt together. As either a minus or a plus, there’s not nearly enough of the bad cheese. 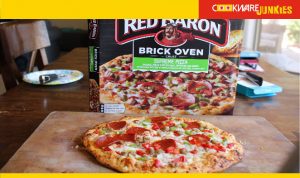 There’s really nothing to like on the Red Baron outside the toppings, and those aren’t good enough to make up for the rest of the pizza.

There’s crunch on the outside and mush on the inside somehow, even though the crust is super-thin. The crust tastes like nothing at all. The sauce is very bland, and not worth eating or remarking on. The sausage tasted like the crust and the veggies were bland grease-sinks. The pepperoni was pretty good and had most of the flavor in the pizza. Where you can find cheese, it’s alright if not too flavorful ,but there’s hardly any there.

Tony’s is the baseline for what not to like in frozen pizza. It tastes like my college apartment. 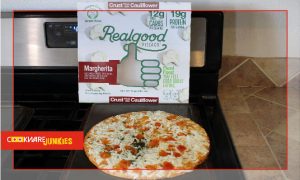 Cauliflower crust can be good in the hands of a careful chef. Not here! This crust was a mushy mess that tasted like mushed up Ritz crackers. The cheese was tasty on its own, but everything else was terrible. 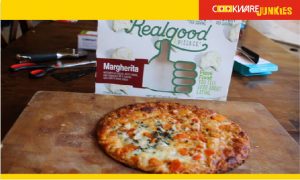 Even the dog looked at us with horror when smelling this stuff.

There are some real losers here, including me for eating eight slices of pizza. Not that I’m against that sort of thing, I just want it to be better pizza. Still, the Freschetta is a gem. I ate the end crust of the test piece with genuine pleasure. The Newman’s Own had some nice stuff going for it too, and I’d be interested in trying some of the other pizzas from them. Grab a couple of these and let us know what you think, or branch out and tell us about what’s in the freezer in your part of the country. For Cookware Junkies, I’m full.

How to Make Your Frozen Pizza Better

If you can spend a little time in the kitchen, you can take your frozen pizza up a notch. Try some or all of these moves.

Check back as we’ll be updating to this list once we have a chance to recover from the last pizza eating session.

I love to eat and I love to cook. I’ve been getting roped into Jacob’s business ideas for decades now, and Cookware Junkies is the best of the lot. Here at the site, I help with the test kitchens and videos, and do most of the write-ups. [Read More]